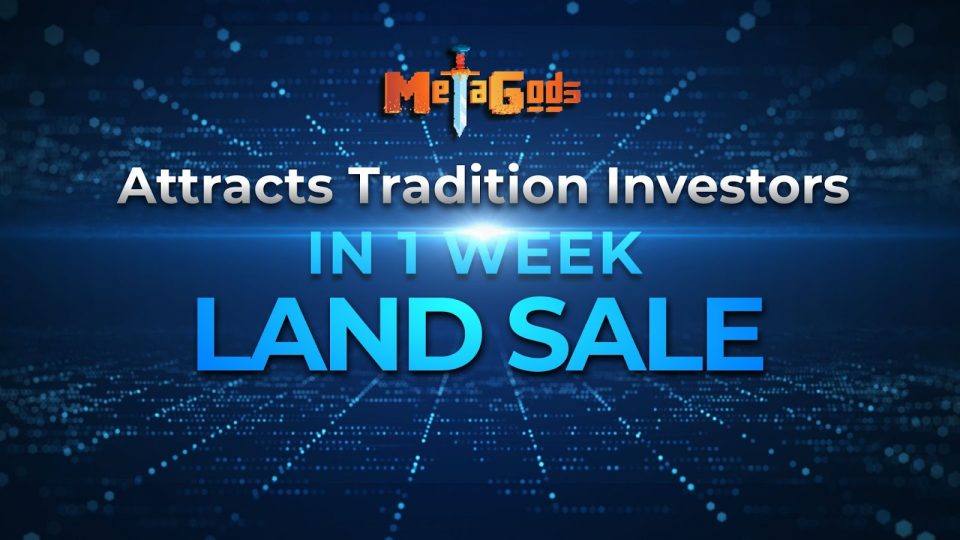 MetaGods recently concluded an NFT land sale that received overwhelming investor support from traditional finance as the new gaming company onboarded some big players and family offices from mainstream markets into their stable of already-strong investors.

These businesses purchased sought-after land plots in the upcoming action RPG title over-the-counter (OTC) and have committed to holding their NFTs for at least three years to fully support the game’s development and see it flourish.

The MetaGods community and a few famous contributors, gaming guilds, and launchpad partners purchased land NFTs in private and public rounds over the last two weeks. Limited plots of land in the game’s infamous Boss Dungeons were listed daily and all available space was quickly sold out, at 5 BNB per plot.

This is another display of enormous investor and community support for MetaGods, which is flush with resources and building strong in anticipation of a huge game release in future.

The captivating action RPG title was initially backed by industry heavyweights and celebrity figures such as tech entrepreneur Alex Becker and YouTube star Mr Beast during a seed investment round that raised $3 million from the likes of Hashed, ABV, Boxmining, Magnus Capital, and Banter Capital (Crypto Banter).

Metaverse is set to explode this year – and for many years to come – and MetaGods is now in an enviable position with bags of trust from large investors and loads more room for growth. With the hefty resources raised to date – both pre-IDO and via NFT sales – the innovative team behind the project is expected to allocate more funds towards becoming a dominant player in blockchain gaming.

After launching a Game Preview Engine during the first month of 2022 to much fanfare and critical praise, development is continuously evolving in the build-up to a beta release. MetaGods looks well-positioned to achieve its goal of sweeping the play-to-earn gaming arena, just as the general crypto market shows signs of a bullish recovery.

MetaGods is the world’s first play-to-earn 8-bit action RPG built on the blockchain. Trade and play with generative NFTs to vanquish dangerous monsters. Thrive in the biggest digital economy – and prepare for the most epic boss fight in the history of the metaverse.

Ledger Enterprise’s Alex Zinder is all about blockchain, crypto and the future of finance

Ripple vs SEC :  Will SEC Produce The Hinman Documents?

Turkey has an obsession with crypto — specifically Dogecoin: Study