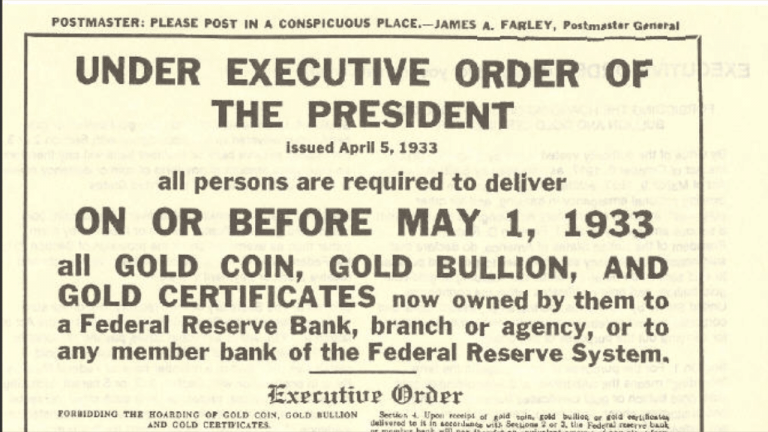 This past Tuesday, April 5, was the 89th anniversary of Executive Order 6102 when the U.S. government would strictly “forbid the hoarding of gold coin, gold bullion, and gold certificates within the continental United States.” While the global economy seems to be heading toward disaster and the U.S. dollar’s strength is being examined, many have questioned whether or not the U.S. government will confiscate gold again.

‘No Crisis Should Go to Waste’

Over the last two years since the onset of the coronavirus outbreak, the world has been dealing with a rollercoaster economy. Months before the pandemic, monetary easing was already in high gear as more than 18 central banks started to notch benchmark bank rates down in a coordinated fashion in September 2019. The following month, 37 central banks participated in stimulus and easing practices approximately four months before the World Health Organization (WHO) declared the Covid-19 outbreak a pandemic in March 2020.

During that month in 2020, the coronavirus outbreak fueled the central banks’ negative rates and quantitative easing policies as it expanded the monetary supply like at no other time in history. The U.S. Federal Reserve was one of the leading central banks that expanded the monetary supply and handed out ‘helicopter money’ to American citizens in the form of stimulus checks. Since then, inflation in the United States has run rampant and month after month, Americans using the U.S. dollar are losing purchasing power.

Since the Ukraine-Russia war started, the economy has worsened. While the spread between 2-year and 10-year Treasury yields inverted, trend forecaster Gerald Celente said if the war ensues, the odds of recession will increase. Amid all of this, bureaucrats have implemented extreme measures like pressuring non-consenting adults to vaccinate, causing significant disturbances in the U.S. workforce. U.S. lawmakers have targeted businesses and economists have called for government-enforced price controls.

With all that has happened in the U.S. over the last two years, and all of president Biden’s executive orders, it is possible the government could confiscate gold again. By simply asking the question on Google, one of the first articles published by mgsrefining.com a year ago today, says the government can absolutely confiscate gold again. “Could gold confiscation happen again?” the article asks. The mgsrefining.com author writes:

In short, yes. Although there is no federal law that explicitly states that the government can call in your gold, during extreme crises the government has the means to seize it whether it comes in the form of an Executive Order or a law.

89 years ago, U.S. president Franklin D. Roosevelt signed an executive order on April 5, 1933, that banned American citizens from owning gold. The order started with a banking crisis, something the U.S. is never short on these days, and by March 1933, the government called it the Emergency Banking Act. Similar to the coronavirus pandemic, the main benefactors of the banking crisis were politicians and bankers. The financial depression was followed by World War II, and American bankers like JP Morgan’s ‘Money Trust’ made lots of money. It is well documented that Wall Street, Morgan, and his friends not only funded the allied forces, but also Stalin’s movement and the Nazi regime as well.

Another interesting aspect about April 5, is that the date is tied to the creator of Bitcoin. Satoshi Nakamoto’s profile on p2pfoundation.ning.com features the date as the inventor’s birthday. In fact, Satoshi Nakamoto’s birthday is April 5, 1975, if we are to believe the birth date is legitimate. However, many assume that Satoshi chose April 5 in order to hint at the memory of when the U.S. government confiscated gold. Interestingly, U.S. president Gerald Ford repealed Executive Order 6102 on December 31, 1974, the day before 1975 started.

Individuals have asked the question many times over the years concerning whether or not the U.S. government can confiscate gold again. Every one of them seems to understand that it’s feasible via a crisis and executive orders that follow. There’s a chance Satoshi Nakamoto wanted to remind the world of this time in history, as it’s possible Bitcoin’s creator thought it could happen again.